This is an old throw I still haven’t perfected it yet Billy Robinson went over it with me a handful of times it’s also on his War Instructional DVD he also hits this throw in his pro wrestling match against Inoki which you can look up. Also download my free Catch Wrestling Comic Book here; http://strengthmonsters.com

Adventures in The Strike Zone The Band

Posted by Sam Kressin in Adventures in the Strike Zone, Uncategorized 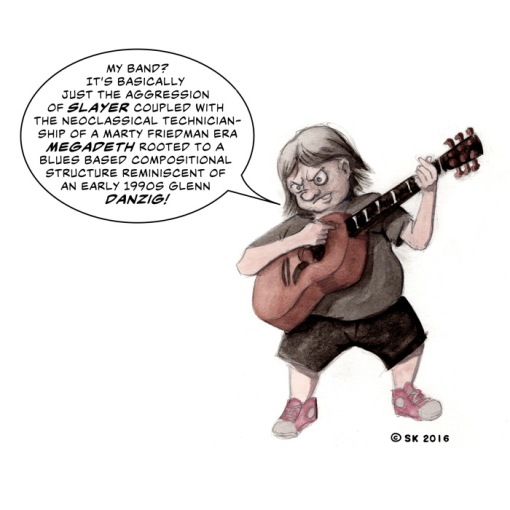 This is a drawing Study I did out of the Famous Artist Cartoon Course Lesson 7 Drawing Pretty Girls. In this one the illustrations on our right are suppose to show a progression of the illustration style from a more realistic foot to a more simplified Cartoon Version of it.

An additional foot study I did out of the Famous Artist Cartoon Course Lesson 7 Drawing Pretty Girls. This study is one I have committed to memory as it’s very important to know the Out Side Ankle is lower than the inside and how to draw different types of foot wear.

In this study out of the Famous Artist Cartoon Course lesson 7 “Drawing Pretty Girls” I am drawing a variety of hair shapes and styles.

Today’s drawing study is done out of the famous artist cartoon course. In this study we are looking at the hair as a large shape and illustrating the difference between a mens hair cut and women’s hair should take up half the head. 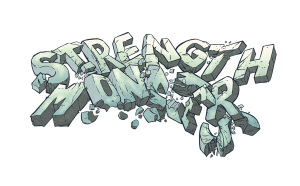 Posted by Sam Kressin in Drawing and Illustration, Inked Drawings, My Inks over My Pencils, Strength Monsters, Uncategorized

The inked hand lettered Cover Title I did for my Kickstarter Funded Comic Book Strength Monsters in “Ultra-Mayhem!”

Today we learn about the “Four essential parts to a sexy girl” according to the Famous Artist Cartoon Course Lesson 7. Below is the drawing I did from this lesson. It is a free hand recreation of the illustration by Joe King. Each one the four circles in the drawing are suppose to be one of the “four essential parts.” They are listed in the course as 1. The Face 2. The Breasts 3. The Hips and 4. The Legs.

The Rough Lettering to the Cover Title of Strength Monsters in Ultra-Mayhem. Illustrated by Sam Kressin.

With Billy Robinson Circa 2011

After training with the Master circa 2011 with my buddy Ricky Lazaro.

While Tang Soo Do and many other traditional martial arts have been discarded by several fractions of the martial arts community as being outdated and ineffective in combat. In recent years there have been a number of very successful professional mixed martial arts fighters with backgrounds steeped in traditional styles of of Karate in it’s various forms. Here’s a quick list of some of these martial artists. Read Full Article here…

Thanks to everyone who backed my Kickstarter the cover to Strength Monsters in “Ultra-Mayhem” has been colored by the great Lisa Moore!

Catch Wrestling Instructional 4 of 5. Also there’s 2 days left if you want to pick up one of my Kickstarter rewards here’s the link; http://kck.st/1O4Ersu

THIS IS UNBELIEVABLE! There are literally only 3 days left I was seriously worried! I was thinking, “man this is going to come down to the last minute,” and then… This morning I get up check my email and find out. It made it! IT MADE IT! I’m jumping off the walls right not. Thank you everyone who’s back this project, liked or shared any of my posts and believed in this! I won’t let you guys down! There are still 3 days left if anyone else wants to jump in and pick up one of the rewards heres the link; http://kck.st/1O4Ersu

Top 5 Reasons You Should Back My Kickstarter

The link to my Kickstarter is; http://kck.st/1O4Ersu At the time of this writing there are four days left and I am 77% funded. Here are 5 reasons why you should back my Kickstarter!

Last of all I want you to take a look at this Screen Shot of my Kickstarter Profile you can go to my project page and it’ll be exactly the same. I’ve backed 20 projects myself. I believe there’s value in believing in someone else’s idea and supporting it. Once again here is the link to my Kickstarter Project; http://kck.st/1O4Ersu

This is part II of my Interview with Local San Diego Artist Aj Fulcher all the Pencil drawings you see in this interview where done by A.J. for Strength Monsters comics. If you want to get a good idea of what the next two issues of my Strength Monsters comic books will be like then read this interview! I have a Kickstarter going right now for these comics and when you support stuff like this you aren’t just helping me finish the project you are supporting local guys like A.J. work towards their dreams and old timers like Mike Witherby make their comebacks! http://kck.st/1O4Ersu is the link to the Kickstarter it’s also at the beginning and end of the article attached below.

Get a Sketch Card like this one from me here; http://kck.st/1O4Ersu

The History of the Pro Wrestling Comic Book Association

The Pro Wrestling Comic Book Association. Anyone who backs my Kickstarter at $3 or higher gets a sticker of the official crest of the Association. Here’s the link; http://kck.st/1O4Ersu

Pirate Santa Is Back!

This project is on Kickstarter an only needs a few more backers to make it’s goal here’s the link;http://kck.st/1O4Ersu

Source: Pirate Santa Claus is Back!

Me Talking About Big Monsters

Don’t forget to back my Kickstarter here; http://kck.st/1O4Ersu

The tournament was the Region 9 Tang Soo Do championships I was 10 or 11 years old at the time. I won both my Sparring and Forms divisions.

Read Part1 Here, Read Part2 here; It’s Saturday circa 1990 and I’m thumbing through records and audio cassette tapes at Kobey’s Swat Meet in the parking lot of what was named the San Diego Sports Arena at the time with Martin de Pedro. Back then CDs were too new to be found at swap meets. As I’m digging through the record section I come across this… A record with a character that looks kind of like a zombie all of his skin is removed allowing you to see his musculature interwoven with wiring, electronics and what could be pieces of robotic anatomy. He’s standing in the middle of some futuristic city one gun drawn the other holstered. This has got to be the best painting I have ever seen I think to myself as I purchased the record for a couple of bucks. When I got home I proudly taped the record onto the wall of my room so I could look at it every day all the time….

Check out other Journal Entries Similar to this one here…

Stumbled across this cool video today while doing more research for the collected print (and download) edition of Worlds Deadliest, Chapter 1; “Deathly Weapons.”

I’ve been working really hard to finished this first collected edition of my Martial Arts Web Comic Worlds Deadliest soon. The book will contain a number of never before published illustrations by myself, biographical essays on important martial artists and a number of additional articles and resources pertaining to martial arts even including some little known and obscure information about Dim Mak!

Hopefully the overall all the finished product will be the martial arts book you’ve always wanted to read that no one ever made.

Designed & developed by We Are Pixel8.